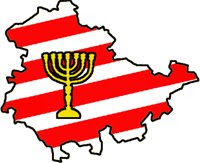 Shalom friends and future supporters,
Medinat Weimar, the newly founded movement for a Jewish state in Thuringia , Germany , is in the process of drafting support for the movement.
We invite and encourage people from any background and nationally to become active members of the movement and to take part in forwarding the vision based on the Thirteen Principles of the movement that you can read below.
If you support the movement please! Enter our website and fill the form of support. http://medinatweimar.org/support/


Medinat Weimar: The Movement for a Jewish State in Thuringia

Thirteen principles of the movement

1. Medinat Weimar whishes to establish a Jewish state in Thuringia , Germany , with the city of Weimar as its capital.
2. Medinat Weimar is a solution to overcome the present crises and heal Jewish trauma, German guilt, East Mediterranean conflicts, East German troubles and many other problems in the world.
3. Medinat Weimar will utilize the autonomy of art and its institutions, as well as using the tools of political campaigning and activism to convince the citizens of Germany , the European Union, the worlds Jewish communities and the international community to support the founding of the state.
4. Medinat Weimar defines Jewish not through blood or ancestry but through similarity in mind, culture, common history and unity of fate. Jews from European origin, Jews from non European origin, Palestinians Arabs (Muslim and Christian alike) and all other parties affected by the activities of the state of Israel are considered to share a common fate.
5. Medinat Weimar invites and encourages people from any background and nationality to become active members of the movement and take part in forwarding the vision.

6. Medinat Weimar can play an important role in healing anti-Semitism, Schuldabwehrantisemitismus (guilt-defensiveness anti-Semitism) problematic expressions of Philosemitismus, both german and jewish self hatred and the ongoing conflict between the Jewish, Arab and Muslim communities.
7. Medinat Weimar is not a replacement of the current state of Israel but a different Jewish state. A state apprising to live up to the vision of being a "light to the nations", generating a cultural and spiritual renaissance as well as a peaceful home addressing the failure of the Zionist claim to "normalize" the Jewish people and establish a safe haven.
8. Medinat Weimar believes peoples maintain not only the rights of self- determination and self-definition, but self-redetermination and self- redefinition as well.
9. Medinat Weimar wants to transverses all ideological, cultural and religious trenches within the Israeli as well as the German discourse.
10. Medinat Weimar believes that Thuringia with its important place in German culture, history of anti-Semitism and German nationalism, legacy of Jewish life and culture as well as its shrinking population and a weak economy is the optimal place for a new Jewish state. A Jewish state in Thuringia will not only provide a resolution to the plight of world Jewry, but also an economic and cultural resolution to Thuringia's plight as a struggling former East German province.

11. Medinat Weimar is a sober and anti-fascist solution to many problems that the state of Thuringia is facing as a former East German province and will foster the development of the country for the benefit of all its inhabitants. A Jewish state is not a punishment but a prize. Through Thuringia we offer all German people an opportunity for redemption as well as liberation from the ghosts of their past.
12. Medinat Weimar wants to raise questions and explore issues such as the rise nationalism versus the reality of globalization and migration and the re-emergence of religion as a cultural identifier versus the secular globalization of capital.

13. Medinat Weimar is not a practical movement, but rather one that seeks to agitate and provoke by taking anti-Semitic, neo-liberal, nationalistic, Zionist arguments to their unreasonable conclusions illustrating their inner logic and absurdity.
We extend our hand to all the peoples of Thuringia in an offer of peace and good neighbourliness, and appeal to them to establish bonds of cooperation and mutual help with our movement and to the future sovereign Jewish people settled in the land. Medinat Weimar is prepared to do its share in a common effort for the advancement of the entire region.
* inspired by Maimonides' 13 Principles of Jewish Faith
Posted by ovul d at 1:11 AM